5 Key Questions to Ask During a Site Walk 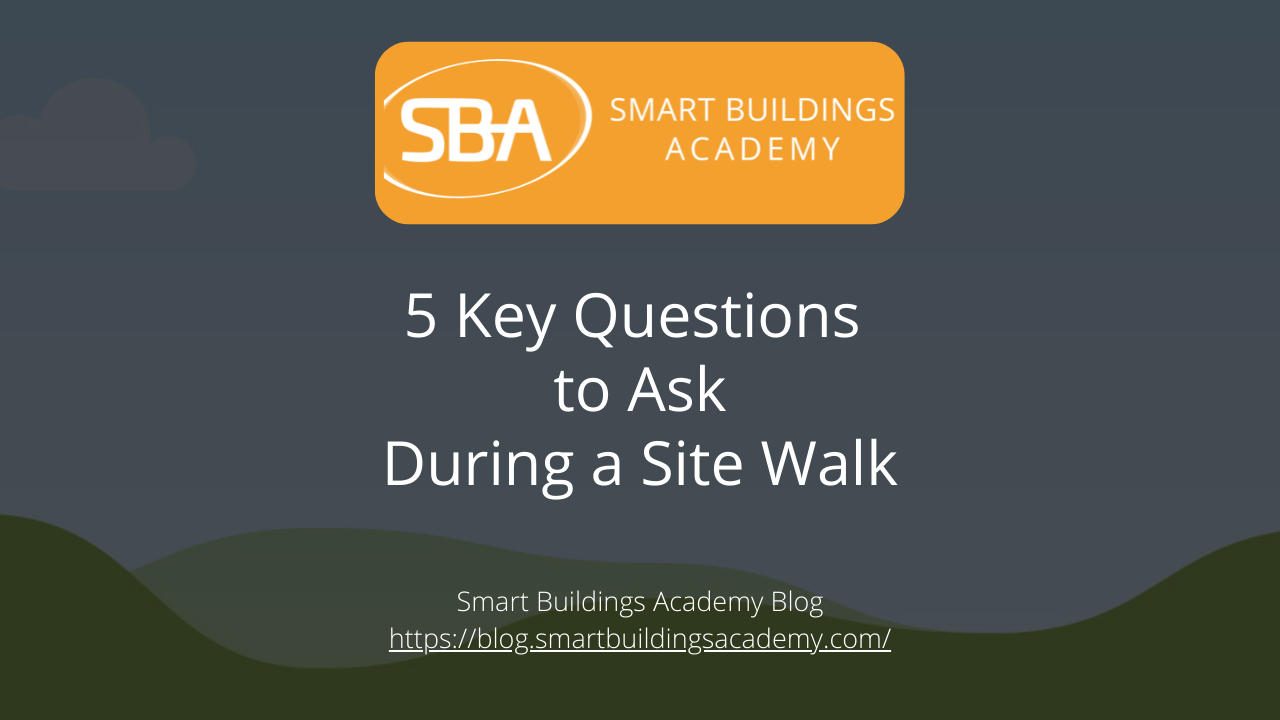 So, site walk. You have an existing customer building, and they're going to do a retrofit, or maybe they're going to do an expansion, or maybe they're making changes. Oftentimes, what will happen is, they will request what is called a site walk. This is where all of the contractors can walk the site, they can look at it, and then they can come up with a scope and an estimate, based on whatever the customer is trying to achieve. You most often will see this in retrofit or major expansion projects.

Now, oftentimes, when you are running into a site walk, it's the questions that you don't ask that actually can be the most strategic. Let’s imagine that you're out there, and you have four or five of your competitors alongside you. You're sitting there and as you're going walking the site, you're asking all these wonderfully smart questions:

Guess what you're doing for your competitors? You're actually telling them risks to avoid, and things that they can build into their scopes and estimates that actually may make them more competitive.

So, if you notice, and this is kind of where you really want to focus in, while you're watching or walking the job site, you may notice it's a BACnet chiller, or you may notice they have some sort of Modbus power meters, or that they have a system that’s degrading. You don't necessarily have to ask about these things. If you have inexperienced competitors, they're not potentially going to notice, or they may not know the difference between a BACnet/MSTP and BACnet/IP chiller. They may not know that that type of air handling or a fan coil unit has built in controls, and it actually only has read-only points and doesn't have writeable points, thus they need to include controls.

So, by not asking questions, sometimes you are actually helping yourself because what you're not doing is, you're not disclosing potential risks to your competitors that they would then avoid.

Next thing is to really understand the environment. This kind of ties into questions that you don't ask. Oftentimes, I will say that maybe you don't ask questions on the site walk, but you get the card of the facility manager, and you ask the questions and follow up.

Well, this is where you have to understand the environment, because depending on if this is a public entity, a private entity, or their procurement policies, even if you ask a question to them offline, they may have to disclose that question and answer to all potential bidders. So, be cognizant of that as well.

Another thing, so we do live in COVID land, right? And who knows what the heck is going on. So, the reality is, there's a fair bit of states where you can't gather up and you can't actually visit sites. So, because of that, you may think you can't do site walks. Well, you actually can. You can do virtual site walks. Those are actually a thing.

If those projects technically aren't announced, then guess what? With the procurement environment, you typically will not have to disclose those question and answers, because those projects aren't yet fully released. Thus, you're not under those procurement obligations.

Now, let's get to the questions. So, there's some basic, obvious questions, but the first three are pretty straightforward.

I’ve been guilty of that in the past when I was less experienced. I would ask for the latest plans and specs, and sure enough, they hand me the specs and plans, but I'm missing out on the as-builts, on potential database and program copies, on test and balance and potentially commissioning reports that sequence out that the plant was designed like this in the spec, but it didn't really work that way; it was designed like that in the MEP set, but it didn't really work that way.

I'm reminded of a high school where even on the final MEP set, it showed certain piping to the tower, but that piping would never work. So, the actual commissioning documents showed and reflected the proper piping layout. If I wasn't aware of that, that directly affected my sequencing and controlling of that central utility plant. So having the latest O&M set, while it seems like a minor detail, it is actually going to be quite beneficial to you.

What you're trying to do here is twofold things, you're trying to understand how the control system is laid out and what's actually in there from a point density perspective, from a point monitoring perspective, from a control perspective. Additionally, when you're able to look at graphics, you're able to see what's online and offline. There's nothing worse than getting a retrofit project where you are integrating the existing system, only to find out that half of the existing system doesn't even work, and you're liable for that because you didn't do your due diligence.

So, for example, if you're a mechanical background, you may ask, “Have you replaced in equipment? Have you upgraded your equipment?” This is the wrong question to ask. I want to be specifically clear on that. You don't want to ask these kinds of close-ended questions that are specific to a single subject matter. You don't want to ask if they’ve upgraded their chillers or made any major changes to the air handlers.

By asking, “Have you had any major changes happen,” you're probably going to get a “What do you mean by that,” response. And you're going to have to fight that temptation to say, “Well, have you upgraded an HVAC?” No, you want to understand, “Have you made any changes to the control system? Has your operations team changed?”

So, for example, you have a room that used to be an office space, and now it's a data closet. The thermal load in that space, as well as the ASHRAE 62.1 ventilation loads, have completely changed. Now, you have an increased thermal load from that equipment, but since it is no longer an occupied space, you have different outside air requirements. You actually have lower outside air requirements, because it is not considered an occupied space.

So, understanding that's going to lower the outside air requirements of air handlers, and sequences, and stuff like that, as well as the pre-cooling and pre-heating capacities, but at the same time, because you're increasing thermal load in there, you're going to have an increased cooling requirement. So not pre, but post cooling, discharge, all that fun stuff. Additionally to that, you're also potentially going to have an increase in reliability concerns.

Alright, so we've covered any major changes and now we want to pivot to kind of more exploratory questions. So, at this point, we went and gathered some information. We went and understood the state of the environment in which we're potentially doing this project, and now we're going to move to “cause questions”.

So, you understand, are they happy with the existing system and what would they want changed? This works, not just for salespeople, but also for technicians who are maybe doing service, and are trying to convince a customer to do something that's good for them to make a change. By them saying they are happy with the existing system, and asking what would they want changed, you can respond with, “Okay, does it meet temperature? Is it controllable? Is it easy enough to maintain? Is it easy to understand?”

These are all things that you want to understand from your customer’s perspective, so that you can properly position. If you have two salespeople, and they're coming in with an equal price, $10 and $10, for a solution, but one salesperson has communicated in the language of the customer: “You've expressed that during design days, your central utility plant isn't able to keep up, and you would like some sort of strategy that is able to increase the capability of your central utility plant and air handling systems to provide thermal comfort to specific spaces. Well, we can do that and here's how we do it,” you know who is going to stand out to the customer.

Then, regulatory change. If you're in New York or California, there's a big push for sustainability. If you're in anywhere in the world, right now, there is an IAQ push. So, what is driving this change? That way, when you're writing your executive summary for your proposal, you can use that language in your executive summary. You're just another number to the people who are reviewing and oftentimes you're shielded, or the people who are reviewing are shielded from you. That's a reality, we all would like to get to the buyer and be able to influence the buyer, but the reality is, oftentimes, the facility director is an influencer, not a buyer. We have to sell through them, and being able to understand organizational requirements, regulatory requirements, and to communicate that in an executive summary, is going to make our proposal stand out from a sea of other proposals that may be the same.

Now, in an ideal world, you would have your target accounts, and you would be doing account mapping. Account mapping is where you look at your target accounts, you identify who are buyers, who are blockers, who are influencers, who are gatekeepers, and you create a strategic plan, either through team-selling or direct-selling, depending on the size of your organization, to cover that account. So, you would now make a map, and that ideally, would be happening before you ever got into the scenario.

Okay, you haven't done account mapping, you haven't planned this out. Well, hey, that's not the end of the world, we can start doing it now. We can start doing it by asking what the decision-making process is and who makes the decisions. That's something our sales team does. They have specific snippets of questions that they need to ask when they engage with new customers, to make sure they understand the buying process, to make sure they understand who makes decisions, etc.

So, there you have it. Those are a bunch of key questions and a bunch of mindsets related to doing a site walk. So, what I want you to take out of this is that sometimes it’s the questions you don't ask. Realize that oftentimes, whatever questions you ask are going to be shared with everyone else, and sometimes you don't want to ask questions because you know the answers already, and you don't want to give your competitors an advantage. Also, don't forget that you don't have to wait for a project to come on the books on the streets. You can go into virtual site walks with your existing customers. You can understand their pain states, and you can understand any changes so you can go influence those. Also, make sure you get the right data so that you can properly scope, estimate, and quote your deals. Make sure that you understand the mindset of the different people within your customer site and understand any regulatory and organizational requirements that are driving change.

Thanks a ton for being here and take care 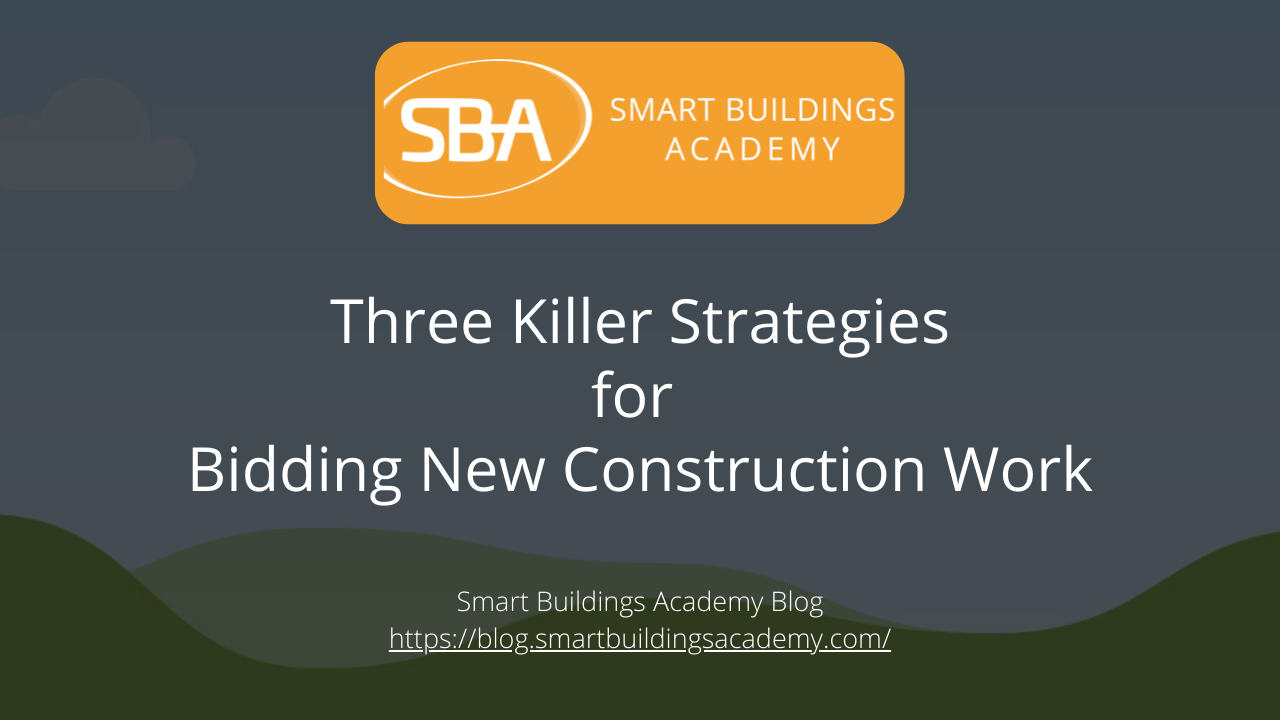 How to Review, Scope, and Estimate Retrofit Projects