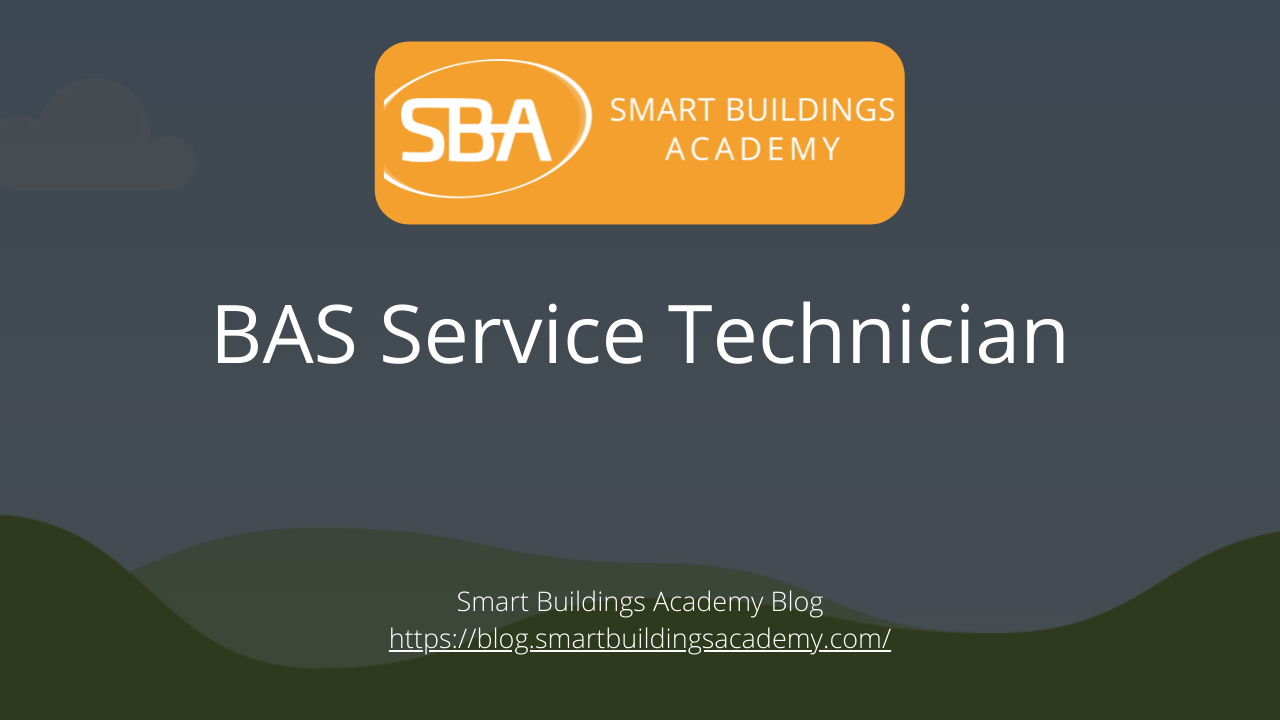 Hey folks, Phil Zito here and welcome back. In this post, we are going to be talking about the BAS Service Technician role. For the past couple weeks, we have been talking about establishing a career in building automation, and we've been talking about the different roles in building automation. Now granted, and I've gotten some feedback on this, these roles are primarily focused on the contractor side of things. There are roles on the owner side, there are roles on the engineering side as well, but for now, we're going to be focusing on the roles that primarily exist within those types of organizations.

Let's dive in! The BAS service tech role was actually my second role in building automation. I started off as this kind of omni-bus role, because I was working for a small contractor and they had me doing design, programming, technician work, etc. Then I moved from that into a service role and very quickly ended up leading the service team. I think it was because of a couple things I did from a training and learning and development perspective that enabled me to step into that.

What is a service tech? Well, a service tech can one of three things. You can be a service technician who does planned service work. That means that you show up at a customer's site, you have an allocated amount of time with specific tasks that you will be doing. Now, I will say that, in my experience, this is becoming a less and less common thing. There's less that you have to do to maintain a building automation system. If it's installed right, these days versus in the past, there was much more you had to do. The electronics were much more sensitive. You couldn’t just go in and decide that if it’s bad, just replace it. No electronics were very expensive and sensitive in the past. Nowadays, if that controller goes bad, we'll just replace it.

Another thing I want to mention is that when you think of a service technician, you kind of most commonly think of the person who gets a call from dispatch, and they have to be able to go and fix an issue. So, this second type of service technician is someone who can take a distraction, and be totally focused on one thing and then they get a service call and have to switch gears and think about something else. I'm able to do that because my mind is able to switch gears, and you have to have that kind of mind.

So, what I tend to find is that focus on the construction side of things, they tend to do very well with linear tasks. This isn't a strength or weakness, and it doesn't make them better or worse. I see some folks who are feel construction is for people who aren't smart enough to do service, and I disagree with that. There's plenty of complex construction work.

What I do tend to find is that folks who want to follow a linear path and want to do this, this, this and this, they tend to work very well in construction. Folks who are more ADHD, like myself, tend to do very well in service because oftentimes, especially traditional service, will end up saying, “I'm going to work on three different things today. I'm going to do a two-hour service call here, three-hour service call there, and maybe another three-hour service call somewhere else,” and they may be completely different things.

Additionally, service, in my experience, gives you the greatest variety of experience which is critical to growing in a building automation career. Now, I know that I often will say that you can bypass experience with education, which is definitely true. You definitely can bypass the baseline required experience with education, but if you want to step into the higher roles, the roles that are more obtuse and complex, then having a depth of experience with a variety of systems types is going to help. This is not because you need to get the knowledge, I want to be clear on this. It's not the experience of getting the knowledge of the systems that you're gaining here; it's getting the knowledge of being able to digest information from multiple disparate sources and piece that together.

I want to give you some examples, because that sounds kind of like pie in the sky. Most people, with a couple weeks of education, can understand how a VAV box system works, how pressure works, how flow works, how chillers stage up and down. If you have focused education on those topics, you can learn that.

Now, what becomes a little more difficult to learn is:

So, it's kind of like a chicken and the egg, and that very well is the experience with service. You often need a diverse skill set with service to be a service technician, but in order to get that diverse skill set, you often have to do service work. So how can you bypass that? How can you at least get yourself up to a level of understanding so that you can execute service work? We'll cover that, as I mentioned at the end of this post.

Another type of service work is known as retrofit, and this personally is my favorite work. It's like all the fun of construction with none of the BS, if done, right. What I find really exciting about retrofit work is I can meet with a customer, problem solve, identify their problem, identify their use case and say, “This is your problem. Let's fix this problem and figure out why you're having this problem. Then let's create a solution.”

I'm not under some GC, I'm not under some engineer. I'm oftentimes writing the sequence, even though you technically shouldn't be doing that, because you're not a PE, and there's liability. But let's be real, a lot of the time in retrofit, you rewrite sequences, and you don't get things stamped. Not saying that's good, because that actually is not good, but it is the truth that a lot of people do that.

So, the retrofit work, to me is really fun, because you get to make things the way the customer wants. You get to be creative, and it draws on so many different talents. It draws on project management, technician, designer, programmer work. It's super-duper fun.

So, service is like a mixed bag of things. You can have the very predictable plan service agreements, like I just show up, I do the same thing. I know you and you know me, I’m the only one you want to work on your system. That's cool.

Then you have retrofit, which is kind of middle of the road. You get that service intensity, but across a longer period of time because you're doing these less predictable things. They're within the structure of a construction project.

Okay, so how do you step into these roles? Naturally, like service, they cost more, the technicians get paid more, the companies bill out more. I get a lot of people who are ask, “ Why is it that the BAS contractor is 60 bucks an hour when they're doing construction,” and we're talking burdened rate, “but when I want them to do service, they're 100 bucks an hour?”

Okay, so let's talk about how we learn our skills. First things first, we have to make sure that we are solid on the fundamentals of electrical, HVAC, BAS, and IT. Now I've beaten these topics to death in previous posts, so I'm not going to dive deep into each one. But just suffice to say that you don't have to have mastery of them. You do have to have a solid understanding. If you can't look at a circuit and tell what's going on, if you can't look at an HVAC system and figure out what's going on, if you can't look at a BAS and identify the parts and pieces and understand, by looking at the programming, what is trying to be achieved, then you're probably not ready for a service roll.

Now, the good news is you can learn most of that via education and bypass the OJT portion of that. What you really can't do, and this takes a little more work, is understanding the connections. I’ve mentioned in a previous post about the time when I was doing a secondary loop at a church, and this went across a parking lot where someone had bumped into one of the balancing valves in the central plant. It was starving the secondary loop, and we were trying to figure out why there was this pressure drop. It was only because of the sound when we walked into the central utility plant, that was able to be recognized. They knew immediately that sound was a deadheading pump. So, we're going to deal with that deadheading pump and address that issue. So, just be cognizant that not always, but sometimes, it's going to be experiential.

Personally, the reason why I was able to move into a leadership role, besides for the military experience which gave me a heads up on leadership, was that I was taking on all the really difficult service calls that people just couldn't figure out. I was doing a lot of self-study in the afterhours, trying to figure out how to work with these various systems and learning these various systems. I actually would read the entire programming manual, like all 900 pages of it, so that I understood how it worked. With that knowledge, I was able to rapidly move up through the service role.

So, like I said, getting it is a matter of skills, and then it's the same process I've talked about before. Reach out to the operations manager, the service manager, explain your passion, explain what you've done to learn. Tell them how you're going to contribute. Give examples of the work and studying you've done and get them to place you in a role. If you do that, once again I've had many people send feedback to me that they've done this and it's worked, you will stand out above other candidates who are not putting in the self-study. Rather than putting in the work, you put in the work, demonstrate that you're putting in the work, and you proactively communicate to the people who actually manage the employees, and you will get hired.

Alright, if you're interested in a service role or a technician role, I definitely encourage you to check out our training programs. They are used by pretty much all of the large OEMs and most of the large system integrators and contractors in the United States to train their employees. I encourage you to use that exact same training to skill yourself up and to be able to move into the role of your choosing.


Thanks a ton and take care.