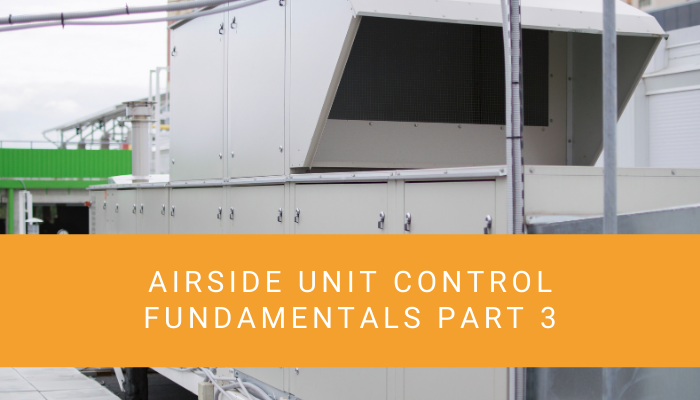 Short on Time Listen to the Audio Instead of Reading

This is the fourth post in our multi-part series on HVAC Sequences.  This post is brought to you by our Control Sequence Fundamentals course.  If you need to learn about HVAC in order to be successful in your building automation career, our Control Sequences course teaches you everything you need to know about controlling mechanical systems with your building automation system completely online, controls theory, systems knowledge, and how systems work, all in the shortest amount of time possible.

One thing I want to touch on, that we didn't get to finish up in our last article, was mixed air control so we will be sure to cover that in this article.

Speaking our last article, in that article we talked about low temp alarms and how when they are triggered, your system will be put in a low temp control state.  I use the word state intentionally, I really want you to get into a state-based mindset as you move analyzing control sequences.  This concept can confuse a lot of people because they are not understanding state-based thinking.

For example, if you are in a dehumidification state, because your return air humidification, humidity level, or your space humidity level is too high, you can expect your control system to potentially be doing simultaneous heating and cooling.  You can also expect that you're going to be trying to drive the air to saturation so that you can then drain out the moisture, and then again heat the air up prior to sending it downstream.  That's how typical dehumidification sequences work.

When we think about our low temp and our mixed air control states, there are several different conditions that can be controlled.  We have low temp control, which is where the incoming air stream is too cold, and you don't want to freeze coils.  In this state you start to close outside air dampers, where most of the cold air is coming from and open preheat and reheat valves, if they exist, to full position.  You then close cooling valves and you run the fan.

You also have a pre-heat system (usually steam, gas, or hydronic) which typically will be before the averaging mixed air temp sensor if you're following the system from end-to-end. The control system will modulate the pre heat system  in order to condition air.  Now, you will sometimes see this on mixed air single path units, but you will especially see this as we move into our 100% outdoor air unit sequences, granted it would no longer be a mixed air sensor and would now just be called a preheat sensor.

A typical 100% outdoor air sequence has the basic safeties you would expect:  high/low static, smoke, and fire detection, but it can also have a low-temp cutout, high/low humidity, and an outdoor air damper status.

The outside air damper status (usually an end switch) is really important when we're using 100% outdoor air units because the supply fan needs to draw air from somewhere, and if you don't have your 100% outdoor air damper open, the unit is not going to have any airflow.  When the unit is not receiving airflow the unit's fan is going to start to suck in the sheet metal.

This is similar to the inverse of having closed fire isolation dampers downstream from a fan. Think about what would happen if those dampers were closed, and the supply fan was blowing air, The air would have nowhere to go so it would pop the ductwork.

We need to be sure that our outdoor air dampers are open prior to our controller sending the start signal to the supply fan.

Speaking of fan commands, if we do command the fan and it doesn't start, then the dampers are going to close and we're going to have a fan failure alarm.

As I mentioned earlier if we lose  damper status, then we are going to turn off the fan, because that is one of our biggest issues.  Now, it's all well and good to have a damper status, but sometimes those damper statuses can fail.  There's a bunch of issues that could potentially occur that could cause us to have no damper open, even though we have status saying it is open.

On 100% outdoor air units, we will tend to have both preheat cooling and reheat.  We tend to see outdoor air units used where we can't recycle air.  You’ll find them serving operating rooms where you constantly want fresh air, not recycled air, or in maybe an area where you're dealing with electronics and you are concerned with the quality of air.   In this scenario, we will often have cooling valves, preheat valves, potentially a humidifier and we will also have reheat.

Fan speed control is hit or miss with 100% outdoor air units. You're either going to have constant volume or you're going to have variable volume.  We can have variable volume with 100% outdoor air units, especially if we're serving operating rooms that have a supply box and an exhaust box in the room.  These boxes are trying to manage a positive pressure scenario in the OR so that nothing can come into the space.

In that case, we would typically have a VAV in the operating rooms and then we would have VFD’s for the supply fan of the 100% outdoor air unit in order to control to the discharge static pressure setpoint. This will ensure that the VAV units have the correct supply flow.  We would have interlocked an exhaust fan (which is not part of the unit) with the air handler. Especially if we have return boxes. That's how we ensure that we are varying our exhaust to either create a volumetric offset or just to maintain positive pressure in the space.

Most times we're going to be looking at and maintaining space pressure.  Sometimes this will be done through a volumetric offset.  Most of the time, we'll have space pressure monitors that will measure pressure of outside and inside the space and we will use those sensors to maintain a positive pressure scenario.

Typically, we will drive a discharge air setpoint to somewhere between 55 to 52 degrees depending on our humidity requirements.  At this point, we're going to reach saturation and begin draining the moisture out of the air stream.  We’ll then reheat the air in order to be at our relative humidity setpoint.

Now I want to talk a little bit more about preheat. Throughout your career you may have experienced sequences where you have to use a 100% outdoor air unit, but the outdoor air is very cold and you want to be able to overcome that cold air. In these scenarios you will often see steam heating used because steam is capable of introducing a massive amount of BTU’s into the air stream rather quickly.

The one thing you must worry about is that if the outdoor air relative humidity is already low and you reheat that air stream with your preheat, you're going to need a humidifier to add moisture back to the air stream.  If we follow the numbers on a psychometric chart, we realize that air has  less capacity for moisture as it decreases in temperature.  So air with a relative humidity of 60% is going to have much less moisture at zero degrees than it would at 70 degrees.  This is simply due to hotter air being able to contain more moisture content.

What happens next, especially if we use steam, is:

This brings up humidification control.  Typically, we are going to have a humidifier that will either look at the space sensors and determine the average humidity so that we can drive space humidity, or we are going to drive it off the actual air stream itself.  It's hit or miss.

If you're doing sequencing your supply and exhaust boxes correctly, and you don't have a lot of things introducing moisture into those spaces because you're properly pressurized, then really, you can control humidity at the supply air stream, and be pretty good.  The reason I tend to avoid averaging is that you could have swings if you're not properly pressurized.  However, with averaging, you can also use that as well and just say, “Hey, we're properly pressurized, our spaces are going to be tight on humidity, and we're going to use an averaging scenario to look at the average relative humidity and then drive that as our setpoint for our supply air stream."

Another thing we can do, is resetting based off average humidity.  So, I'm giving you a lot of scenarios.  I'm not necessarily telling you which one is my preferred scenario, but as I was saying there's a couple scenarios. You could:

This is really up to whoever writes the sequence, but it's also up to you depending on how tight and how responsive you want the control.


So, you’ve now been given four different scenarios:


By this point, I really hope this terminology that I’m utilizing is familiar to you.  If you haven't read the past three posts, I really encourage you to do so because they build upon one another, and I'm starting to go into more advanced sequencing and controls theory.  I want you to be comfortable in taking this information in and I hope you’re really starting to understand the theory behind these controls sequences that we are enacting.

In some instances, especially for 100% outdoor air units, you'll have an ERU, which is an Energy Recovery Unit. The ERU could either be for humidity or for BTU’s.  In the case of humidity recovery the ERU will have a wheel, usually with desiccant on it, and it will reclaim moisture.  It will then reintroduce moisture into the air stream or remove moisture and introduce it to the exhaust air stream, depending on what you're sequencing.

In regards to heat transfer some ERU's will have a heat pipe where you have a set of coils in the incoming air stream and in the outgoing air stream.  During cold weather you'll take some of the heat from the exhaust air stream and transfer it to the incoming outdoor air-air stream, thus, heating up the air.  That outdoor air stream will absorb the heat and it'll transfer the chilled glycol back to the exhaust stream which then will once again absorb heat from the exhaust stream.  So, that's an energy recovery scenario that you may see in a 100% outdoor unit.

Our next topic is makeup air units.  They’re pretty straightforward, at least on the surface, but they can get complicated.  You'll see these a lot in high rises, in kitchens, and in buildings where you're exhausting airflow and you need to make up airflow into the space.

The whole point of a makeup air unit is to repressurize the space or buildings so that you maintain positive pressure as the air is exhausted out of the space.  You will see these in kitchens where you have a dedicated kitchen exhaust and you're using a make-up air unit that is running in parallel.

Makeup air units can be pure makeup air units, which are units that only contain a fan and outdoor air damper.  This type of unit will bring in air at a static CFM value so that it pressurizes the building.

Or you have makeup-air units which are more complex. These units have mixed air returns with face and bypass dampers.

Usually, the bottom damper bank will face the coil.  It just depends on how the unit is built.

When the temperature setpoint is satisfied the bypass damper opens to bypass the coil.

Don’t forget to check out our Control Sequence Fundamentals course and leave any comments you have in the comments section below. 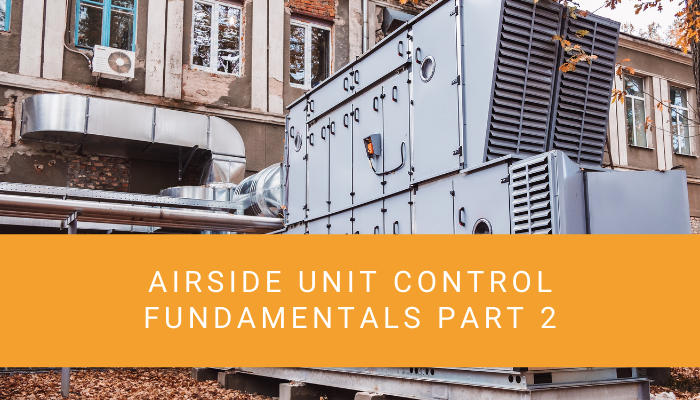 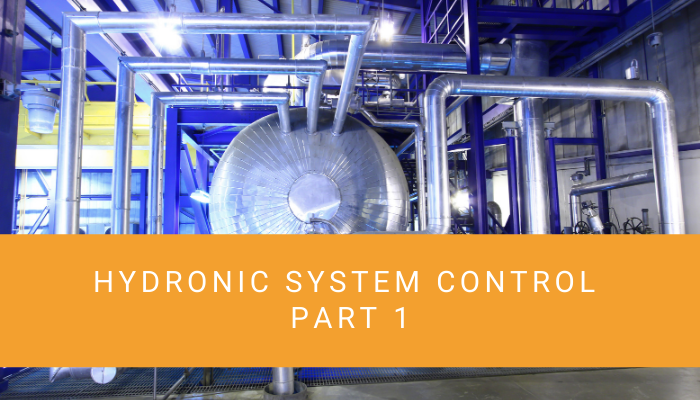